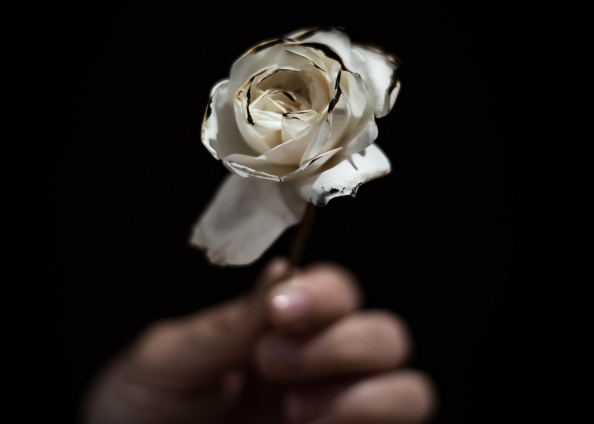 It is not these small fears that particularly threaten her and lead her to despair. Behind them lies what we properly call fear—fear of ruining one’s life, fear that life may become gloomy and difficult to the point of being unlivable. [the fear that] Being is not good, especially if you have not experienced it as welcome, have not had “Yes” said to you, that is, if you have not been loved. This indicates that the fear which transcends all fears is the fear of losing love altogether.

Surrounded by the still-clean drifts of the city’s recent snowfall, the Ecuadorian restaurant radiates the succulent warmth of cooking meat into the pure Minnesota air.

The facade is unassuming to the point of camouflaged. But like most good stables in and out of Narnia, this one’s inside is bigger than its outside. We beat the dinner rush by a few spare minutes. Before long, the cozy tables beside us and long pew-like bench I’m sitting on have filled up with fellow diners.

I have recently been making a concerted effort to talk about subjects besides religion and politics. It’s not going well. Any small streak of hewing to noncontroversial conversational fodder is quickly broken by an earnest questioner inquiring: What do you think of Elizabeth Warren? or Okay now tell me, was Irenaeus a heretic?

A few forkfuls into dinner, my date asks me: Okay, so Jesus.

My carefully-manicured Acela Corridor party guest facade is quickly squashed by the most enthusiastic version of my under-utilized theology teacher self, grinning with toothy gusto as she explains the core tenants of source criticism.

So, where do Catholics fall on this whole “taking everything in the Bible literally” spectrum.

That word “literally” is a sticking point.

There’s so much, of course, that is not meant to be taken literally. The original writers of the Gospels, I think, did not have a word for literally.

I begin, of course, with Genesis. With the Jewish Grandmothers passing on the stories of their God to their grandchildren in the dark of Babylon, in the bloody world of Marduk. Who are we and who is this God we worship? ask their children. The grandmothers respond until one of their grandchildren write their stories down. This, of course, is not literal history, but a good exercise of poetic imagination.

I describe the Trinity, because against the backdrop of the Trinity, Incarnation not only makes sense, but almost seems to be a logical fruit of the initial act of creation. And the Trinity is sensible, liberal truth: that, at the heart of reality is a relationship of radical equality, generosity, and love. Who would not want to believe that this is the reality we model ourselves after?

I recall the story of the theology professor telling one of my Very Sure Male classmates that Christ’s walking over water was not historically verifiable. The limits of what-we-can-know-for-certain are narrower than we think.

Doing my best work at making my faith palatable to logic, as reachable as possible to scientific rationality, I circle around the literal sticking point: a body in a tomb.

But what about Jesus’ body being raised from the dead?

I pause. Yeah, I say, discovering the words as I say them, I believe that literally. And I don’t think I realized that I did until I said it. Could I actually describe the mechanics of what happened on Easter Sunday? Could the writers of the Gospels?

While highly symbolic, poetic language, what’s written there is not “just” a symbol, or a sign or a poem. What’s written there bears testament to some new way that life ends (or begins), some new triumph of love—a radical innovation—unexpected, a departure from what has been before. One of those great wrenches of improbability and unpredictability. And I do not always know what I believe is on the other side of Resurrection. But, I do know that when I say I believe in the Resurrection—in the literal, empty-tombed Resurrection—I hope for what I can’t claim to believe.

Fumbling through my llapingachos con chorizo and impromptu confession of faith, I feel like one of those Greeks blushing at the folly of the cross. But I blush because I’m foolish enough to believe it. I blush because everyone else at the cocktail party thinks I’ve gotten the wool pulled over my eyes, that I’m naïve enough to believe fairytales peddled by a marauding patriarchy in bedazzled sheep’s clothing. I blush, but I feel the rush of adrenaline of jumping from the high dive.

Back in New York, I listen to Hadestown’s “Promises” over and over again, shaking my head as Orpheus and Eurydice—the unfortunate participants in the ur-breakup—make their vows of undying fidelity.

Christian hope, says Ratzinger, touches ground. It touches the substance of the world. The one who hopes stands on something deeper than death, has staked their ground on something more substantial than the shades. Is it possible that Orpheus could harrow Eurydice out of Hades?

I suppose it was exactly this hope—that dies at the end of each retelling of Orpheus, as it fades with Eurydice back into the dark—that Christ’s followers found vindicated by the empty tomb. Hades, finally, plundered by love.