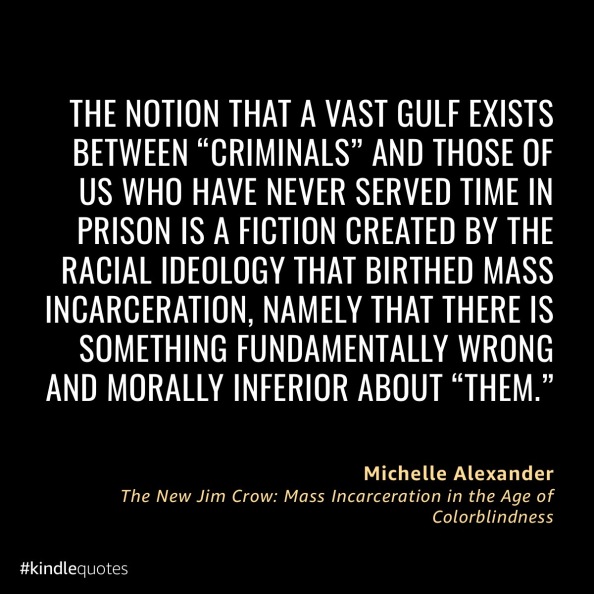 “Jesus was right about those men who crucified him. They knew not what they did. They were inflicted by a terrible blindness.”—Michelle Alexander, The New Jim Crow: Mass Incarceration in the Age of Colorblindness

In the earliest Gospels, the Pharisee is Christ’s starkest opposition. A caveat: the devil seems to be Jesus’ real nemesis, at least in Luke’s Gospel, and via the “darkness” of John’s, but in the Synoptics, Jesus is facing off more squarely against earthly opponents, which, quite often, seems to be the laws of the Pharisees, and their collusion with the corrupt colonial government of the Roman empire.

This examination of the Pharisee is not to politicize Jesus, a figure who—despite his disciples best efforts during his life and resurrection—resists reduction to a political figure or a mission understandable purely in terms of historical politics. But the life of the world is not unimportant to the life of the Son of Man. The texture of what the world is and how the poorest and most disenfranchised in the world are treated here and now is of great concern to him, because we are called to imitate the God who made us in our own creation. And what is a more universal or fundamental creation than our cultures and our societies? What greater call can the Creator task us with than to be fruitful and multiply the goodness he has given us into the fecundity of a loving and life-giving community? So the political nature of the Pharisee, particularly as their sin seems to be so political and public in nature is not tangential to the story of Christ’s work on earth and the moral lessons he leaves behind.

But what exactly is the malady of the Pharisees? What is their sin that is so egregious that it warps even their perception of Christ and their interactions with—reportedly—history’s holiest man? It seems to be the same that afflicts those that crucify Christ on the cross—they know not what they do.

But, on the contrary, they know, in fact, quite well what they do. They have reasons and purpose for their actions. They have moral codes to uphold and strict standards of behavior to which they conform. But they don’t see the effects of their actions upon a larger population, a population, for—whatever reason—lies beyond the bounds of their social consciousness, communal solidarity, and empathy. Their sin is a carefully curated blindness, scrupulously crafted blinders, so effective that they cannot even see them. They cannot even acknowledge their own blindness. What hope for conversion is there for the unseeing person who insists they are not blind?

Reading John 9 again, in light of the current discussions around race, particularly as I read Michelle Alexander’s flaming jeremiad against the prison industrial complex, The New Jim Crow: Mass Incarceration in the Age of Colorblindness, I am struck (again) by how perfectly pharisaical the condition of the white person in America is.

Sociologist Eduardo Bonilla-Silva lays out a system of understanding color-blind racism in the United States. Colorblind racism is a series of structures and frames that form an “impregnable yet elastic wall that barricades whites from the United States’ racial reality.” The system we live in is designed to perpetuate our own pharisaical blindness.

Racism, as Alexander points out, echoing Martin Luther King, Jr., now operates in the darkness, on the fringes of conscious sight. Gone (mostly) is the toleration for outright racial bigotry, and rather racism coasts on the indifference of those in power to those outside their protected social spheres. As Alexander so deftly analyzes in the case of the Jena 6, the noose, and other symbols of outright Klannish racism that persist, the more overt a racist action appears, the more it seems to be a mole that has not been malleted in our national arcade game of frenzied repression. It is impossible, she writes, to launch a present movement against present offenses. The more we (white people, the media, those who long for an equitable society) see these racial incidents as flare-ups of a dying fire rather than heads of a hydra that is alive and thriving, the more we are generated against decapitating the hydra.

Alexander focuses her text (now ten years old, and dated in some respects—particularly in the state of Black activism and movements like Black Lives Matter, but, unfortunately, mostly entirely still accurate and prescient) on the persistent, egregious sins of the prison industrial complex and how our mass incarceration system is designed to sweep black men, rendered economically redundant now that industry has been moved off-shore, into cages, wasting their lives away in prison. America’s economy, built on cotton, was built on Black bodies, watered by black blood, and our country persists in this disgusting deal with the devil to this day.

Alexander unstintingly examines the malicious system of racial profiling of the police, judicial support for stampeding over fourth amendment rights, the racist “War on Drugs” that implemented cruel and unusual punishments for minor drug offenses that were disproportionately applied to impoverished black men and passed over white drug users and buyers and powerful, violent kingpins like an appeased angel of death.

Alexander’s call for change—for radical, systemic change based on equity not cosmetic diversity—is powerful and, in many ways echo King. But she stops short of saying explicitly a message that is designed to alienate her audience.

I remember being told at some point in my education that Martin Luter King, Jr. was not a saint. Why not? He was a communist. Instantly, I remember seeing his image in my head besmirched, a halo removed. Anyone who was a communist must be fundamentally flawed, a house built on atheistic, shifting sand rather than the rock of Christ-anointed capitalism. There are many reasons people are not saints—being a communist is not one of them.

Alexander points out that race has been used, time and again, world without end, in this country as a means of elite, powerful, wealthy whites (because those are the wealthy people in the United States) to “divide and conquer” the democratic majority. Working-class whites and blacks compete for the same jobs. But, instead of restructuring our economy in a way that promotes job equity and equal wealth creation, rather, elites have pitted whites in competition against blacks for jobs, fomented racial divisions, and then offered racially discriminatory solutions instead of economically equitable solutions.

King’s dream, says Alexander, was “a society that is capable of seeing each of us, as we are, with love. That is a goal worth fighting for.” King fought for this by not only fighting for systemic, not simply individual advancements for black men and women, but also by advocating for economic change. I think of this as I listen to a benighted white man dismissing the problems of the urban poor in DC, who says healthcare costs are rising because people are going to the doctor too much, and who sincerely misunderstands the most basic tenets of Catholic Social Teaching. I certainly have operated in the same way: conscientiously living in accordance with principles that cause others to suffer. But, politically, these questions of economic transformation and racial equity seem to me both to be entangled in the problems of white blindness, and both are fundamentally linked to the foundation of our country itself. Our original sin seems to be that we sold our birthright for a mess of pottage no greater than a cotton field and that we have not been able to define freedom expansively enough, with enough liberation and communal solidarity, to let that freedom embrace the entire continent. Rather, we have weakened, attenuated our image of freedom to be an individual mandate, and to miserly extend to a select few who are only several degrees removed from the white Englishmen who drafted our constitution. We continue to be in a blindness of our own making, and yet we say we see.

“Millions of negroes have been crucified by conscientious blindness,” says King. I think of the innocent crucified—nearly literally—on the blind indifference of America’s selfishness and I think, as we gaze on them, we gaze, like the blind soldiers, on our salvation. The innocent victim, murdered unjustly, scapegoated (“is it not better that one man should die”), shunted off into prisons for the same crimes committed by white frat boys with impunity, is precisely the one who can lift the scales from our eyes, who offers us the chance to be healed of the snakebites the body collective is swollen with, who offers us an opportunity to break out of the system of death we have constructed for ourselves and enter into new life. It is precisely the outcast—the criminal, the felon, the “undeserving,” the desperate, the poor, the very, very impeachable among us—those who lie beyond the boundaries of our sight, who can show us the way to freedom. May we have the eyes to see and the ears to hear